To support the global LGBTQ+ community and the equality movement, Apple announced the launch of two new Pride Edition bands with dynamic Pride watch faces in June. The Sport Pride Edition loop features a color gradient and the word “pride” woven directly into the band this year. Additionally, Apple is also releasing a new Shot on iPhone pride campaign on Instagram, which captures the essence of LGBTQ+ artists and personalities around the world.

Pride Edition Sport Loop’s unique design is said to be inspired by members and allies of Apple’s LGBTQ+ creative community. Apple used a new technique to remove several of the double-layered nylon woven textile loops on the strap, revealing the word “pride” in a cursive style inspired by the original “hello” greeting – displayed on the first Macintosh in 1984 – giving the word a new three-dimensional appearance.

The team created a color gradient that combines the original rainbow colors with those of different pride flags, such as light blue, pink and white, which represent transgender and non-conforming people. to gender, and black and brown, which represent black and Latino communities. The colors also represent those who are living with HIV/AIDS or who have died from the disease.

This new watch face, inspired by several pride flags, combines colors to represent the strength and mutual support of the LGBTQ+ movement. Each strand of colored yarn contributes to the overall composition of the watch face, mirroring the woven loops of the Sport Loop. When the user turns the Digital Crown® on the Apple Watch, presses the screen or raises their wrist, the colored wires move. Customers will be able to access the new matching watch face using the new App Clip feature included in the strap packaging.

The textile loops have been removed using a new technique to reveal the word “pride” written in cursive on the strap, giving it a three-dimensional look and feel. 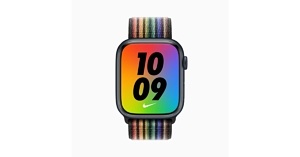 A New Nike Sport Loop Pride Edition Celebrates The Rainbow’s Full Spectrum and includes a rainbow colored Nike Bounce face to go with the new band. The Sport Loop celebrates people who develop sport for future generations and inspire others to experience the joy of being authentically themselves, in addition to Nike’s Be True collection. Be True is part of Nike’s broader LGBTQ+ commitment, which includes recognition, advocacy, inspiration and education.

The Nike Sport Loop for Apple Watch Pride Edition features black stripes, which are a design theme from Nike’s Be True campaign, which promotes LGBTQ+ equality in sport.

A new blow to the iPhone Pride campaign

The Shot on iPhone pride campaign will feature images from an illustrious group of intersectional creatives, celebrating current queer pioneers at locations of historical significance to the LGBTQ+ movement, from Harvey Milk Plaza in San Francisco to Paulista Avenue in So Paulo. The series, which will soon debut on Instagram, will include photographs of Ryan McGinley at Stonewall Inn in New York, Evan Benally Atwood at Window Rock in Arizona, Meinke Klein at The Homomonument in Amsterdam, Caia Ramalho at Paulista Avenue in So Paulo, Lydia Metral at Plaza de Chueca in Madrid and Collier Schorr at Harvey Milk Plaza in San Francisco, all of which feature Baobei.

For the latest gadget and tech news, as well as gadget reviews, follow us on Twitter, Facebook and instagram. For the latest tech and gadget videos, subscribe to our Youtube channel. You can also stay up to date using the Gadget Bridge Android app. You can find the latest auto and motorcycle news here.

Amazon now offers Apple Watch Black Unity Sport Strap 40mm for $19 with free shipping for Prime members or order over $25. Normally at $49, today’s bid offers a new all-time low at $18 below our previous mention. the The 44mm model sits at $19 at this time too. Launched last year as Apple’s first […]

Just like with other workouts, Apple Watch is able to measure multiple metrics while users swim, including number of laps and type of strokes. apple watch is among the most popular smartwatches available worldwide. The latest models of devices come with a sleek display, high-performance chipset, and durable design. Additionally, the smartwatch provides relatively accurate […]

What is the best luxury Apple Watch case? The Apple Watch has grown in popularity in recent years, so making a statement with it has never been harder. Luckily, a high-quality, luxury case can solve that problem, whether you’re looking for something to wear on formal occasions or take on the hiking trail. Luxury Apple […]